I recently received my seventh “Most Valuable Professional” award from Microsoft. Oddly, I don’t think I’ve ever written about what this award means to me until this point. 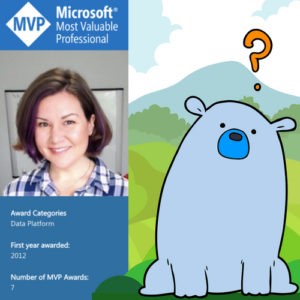 In part, this is because when “renewals” come out, there are always folks I know who have not been renewed – and for many people that can be a painful time. It’s never easy to celebrate when others are hurting.

I wanted to write this post not to brag, but to discuss why this award has come to mean more to me– and why I’m eager for you, friend reader, to compete with me for your own MVP Award.

At first, I just wanted to be in the club

When I first began giving talks on SQL Server, I learned about the Microsoft MVP program from other speakers. I had no idea what it was before then, even as a Microsoft employee I had not heard of it because my role was not directly within a product group.

I learned that there is a private email distribution list for SQL Server MVPs (now known as Data Platform MVPs), which connects MVPs with each other and Microsoft developers and program managers. I learned that there is a regular conference for MVPs, the MVP Summit, which provides training, networking, and often previews of upcoming features in the products.

And I learned that being an MVP was recognized by speakers in the community as being somewhat special.

Of course, I wanted to be special, too!

It took some time before I ever came close to being nominated for the MVP program, but I first received the MVP Award in 2012.

You know that old Groucho Marx quote about not wanting to be a member of any club that will have you? Once I first received the award, I was glad that I was “special,” but I quickly lost sight of its value.

This has more to do with me than it does with the award: when you receive a lot of email and are busily starting a company, joining a large distribution list may not be as glorious as you thought.

And when you have a lot of social anxiety at conferences, you may end up being less excited about an additional conference each year. What seemed like a great networking opportunity in theory transforms into a reality when you wish you had the nerve to be out meeting others, but find yourself clinging to people you know well and making plans to safely return home to everyday work and established patterns.

Over the years, I grew up a bit

I continued my community involvement over time. I blogged about SQL Server and I ventured into videos. I spoke at conferences, I wrote free troubleshooting scripts, I gave free webcasts, I created training courses and gave many away for free. I put together SQL Server themed posters and desktop wallpapers. I had fun.

To be honest, I did these things because they were good for me and for the community. Blogging helped me learn things, remember things, and it also helped build a consulting and training business. Presenting, video making, and everything is similar: in the modern world, the more information you share openly, the more benefits can come back to you. Contributing to the community while realizing the benefits for yourself is perfectly OK with Microsoft, too: the point is that you’re contributing.

Earning the MVP Award repeatedly has been a side effect of my efforts. I have generally only focused on earning the MVP Award when I have come upon the annual task of quantifying the “reach” of my contributions in page views, video performance, and students reached.

Along the way, I have matured as a person. I started working on my anxiety, and learned techniques to get the most out of conferences.

I attended the MVP Summit this past year and enjoyed it immensely– far more than ever before. I made more connections with other MVPs than I had thought possible, I learned a lot during sessions, and I had fun.

Part of maturing as a person is realizing how lucky I am to receive recognition from Microsoft, when I am doing things that are also good for myself. I write and present according to my own interests, I don’t follow any specific guidelines or tailor my content with the award in mind.

I work on what I think is important and useful for myself, for developers, and for DBAs, and I often focus on “evergreen” content rather than the latest offering – unless I think the latest offering may be very interesting or awesome for my audience.

And so, I am very grateful that Microsoft recognizes my work as important. I’m thrilled that they seem to be inviting me to visit campus for the MVP Summit again! That they will help me understand features that are coming, and that they are open to my feedback on how to shape the features. (Note: this openness to feedback is not exclusive to the MVP program, by the way. One way that MVPs can be useful is by connecting customers with interesting use cases and needs to the right Microsoft employees.)

I believe that I’m getting better at being an MVP, simply by getting better at taking advantage of the benefits the award provides. I don’t plan to change much in terms of contributions: I’m still going to follow my interests and work in the areas where I have a passion. But while I do have the award, I’m going to make the most of it.

Thanks to Microsoft, and thanks also to my fellow MVPs, past and present, for making the program awesome and engaging.

If you would like to be a Microsoft MVP…

I encourage you to contribute to the community. Absolutely do it in a way that also benefits you: writing blog posts on a domain branded under your own name can be a great resume builder! Publishing fun YouTube videos and building a strong channel following can help the community, and help build your reputation at the same time.

Building a profile answering questions on an online Q&A site and answering questions on Twitter can help, too – but do think about doing these things in a way where you can summarize the number of people you’ve helped, and show off your work to your current employer, to your future employers, and also on something like an MVP application. (Example: for each question you answer, why not capture the information in a blog post as well, with supporting references, that links to the question? That helps you keep track, and also build an index of your work.)

Although I began this blog post with a note that sometimes folks don’t get their MVP Award renewed, also know this: there always needs to be room in the program for new MVPs. I love seeing the list of new folks in the program. While I plan to contribute as much as I can for as long as I can, I believe part of me will smile when someday I don’t receive the award and instead see a lovely new crop of folks who are excited to join the “special club.”

C’mon folks! Make it even harder for me to make the cut for re-award next year!

The bar is already high to be an MVP, but I encourage you to join in and contribute: bring your own voice and fresh new take on community involvement. Start wherever you want to start, and build from there: be persistent, and you’ll find your style, your opinions, your special angle on this whole thing.

I think your stories and articles and code can be compelling. I think they can help a lot of people.

I think you can be so awesome that it may be tempting for Microsoft to cut folks like me from the list, and add you in, so they can hear your voice more clearly. And I want you to be that awesome!

Because the more complex and interesting and welcoming we are as a community, the stronger we will be. By contributing, you help me, too.