What tools in SQL Server will notify you about blocking and help track the queries behind your toughest blocking and deadlocking problems?

Watch the 21 minute video, subscribe to the podcast, or read the episode notes and links below.

What is the best way to set up blocking and deadlock alerts on the server? I want to be notified automatically without any impact on the prod server.

Woo hoo, I love this question!

So first off, I’m going to answer this discussing the free, built-in tools with SQL Server. If you have a budget for custom monitoring tools, you can buy fancy tools that have customized notifications for blocking and which capture the queries and plans involved. If that’s the case, set up free trials against a test system.

But not everyone has budget for every single SQL Server instance. So it’s extremely useful to know what SQL Server offers to help you with this.

And by the way, if you’re going to be at the SQLPASS Summit in Seattle in just under a month, I’m giving a session that shows different blocking scenarios. Come see my session, The Great Performance Robbery: Locking Problems and Solutions on Thursday, Oct 27th at 10:45AM in room 6C.

I like to set up blocking notifications with a simple SQL Server agent alert on the “SQLServer: General Statistic: Processes Blocked” performance counter.

This will not give you the queries involved in the blocking – don’t worry, we’ll cover tracking that in the next step.

This alert is low impact and it will let you know when you need to look at the SQL Server.

To get this alert to work, you’ll need to:

A few things to note:

Create some blocking in a test database or in tempdb and make sure the alert works.

I have example code to create blocking and deadlocks for your dev environments in my post, Deadlock Code for the WorldWideImporters Sample Database.

For production databases, you can create a temp table and write similar code to create blocking in those. 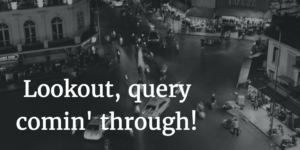 Finding the queries involved with the Blocked Process Report

OK, we’ve got notifications. We need SQL Server to give us more information on who is involved in the blocking.

I like to use the built-in Blocked Process Report for this. This has been in SQL Server for a long time, and it’s extremely useful.

The Blocked Process Report shows you the “input buffer” of the commands involved - it may be partial information and not the full text of the query. It will also show you the login name for who is running what, and the type of lock requests involved.

The Blocked Process Report is pretty lightweight, because SQL Server has to frequently wake up and look for blocking situations that can’t resolve themselves. By default, the deadlock monitor wakes up every 5 seconds and looks around to see if there is a deadlock which it needs to break. You may enable a feature called the ‘Blocked Process Report’ that tells SQL Server to additionally issue a report on any blocking which it finds.

To get this to work, you need to:

Once you have the trace file, you can copy it off of the production server to interpret it.

The viewer makes it easier to see the root of the blocking chain and who was blocking whom.

This trace is pretty lightweight, but with any trace you want to make sure that you don’t add a bunch of events that you don’t need, and that you periodically clean up the files and don’t let it impact drive space.

When I talk about running traces, I don’t mean running Profiler

We’re entering dangerous territory here. Whenever you talk about tracing in SQL Server these days, someone gets offended.

Here’s what you need to know. There’s two main ways to run a trace:

I do not like leaving the Profiler application running because I’ve seen it do everything from slowing down performance to filling up drives over the years. And creating Server Side traces isn’t very hard if you do want to use SQL Trace.

I personally only like to have a trace running if I know I need it and am going to look at it. So I only enable this when I have a blocking problem. Whenever you choose to leave a trace running, you need to periodically check in on the files its created and clean up after it.

What about locking problems where SQL Server has to step in and kill one of the queries?

You have a few built in options about how to get info on this. There are some trace flags that you can turn on which cause some information about who is involved in the deadlock to be printed to the SQL Server Error Log. This isn’t my preferred option because the information is very hard to parse through and read.

I find it more helpful to get a ‘deadlock graph’, which is a picture of how the locking fight went down.

On older versions of SQL Server, you can capture the deadlock graph with a server side trace.

On newer versions of SQL Server, you can capture this with an Extended Events trace.

A great resource for deciding how to capture deadlock information is Jonathan Kehayias' excellent Simple Talk article, Handling Deadlocks in SQL Server.  He covers how to collect the graphs, shows examples of how they look, and gets you started tackling them.

If you get through this point and need to get really fancy with deadlocks, Michael J Swart recently wrote about using Event Notifications to collect execution plans related to deadlocks in his post, “Build Your Own Tools”. Just don’t try to run before you walk: this is pretty advanced stuff and you need to be comfortable using Service Broker, which is part of Event Notifications behind the scenes.

A fast rundown of the free, built-in tools we covered:

Want clarification on some of the basics? Got a question that jumped into your mind reading or listening to this? I’d love to hear it– asking is always free and easy!