A C# developer wants to be a DBA, but is having a hard time landing a job. Should they take a pay cut and go for a Junior level job? Or could there be another path?

Find the podcast version at littlekendra.com/dearsqldba.

A written version of the discussion with clickable links is just under this video.

I’ve been a C# developer since year 2000. I want to move to be a DBA. I’ve started getting involved at user groups and SQL Saturdays but nobody wants to hire me as a DBA.

I have been trying to move to other companies but my resume is strongly inclined to show my C#, front end experience. I know for a fact that I’m really good on SQL as I keep solving problems in every other project but no one seems to pay really attention to the DB. I have noticed that when applying for positions I get called for my C# experience but not when applying only to SQL jobs.

Should I find a Junior DBA position and take a pay cut?

This isn’t an easy transition 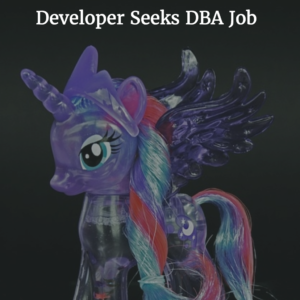 DBAs out there: think about transitioning the other way, from DBA to C# developer. It’s not simple!

It’s not just the pay cut– Junior DBA jobs are hard to find.

Hiring managers are often wary of bringing in someone with senior experience in another area who is used to earning more. There’s a real risk that you’ll be dissatisfied with “the grunt work”, which you’ve outgrown in other areas. And doing the grunt work for less pay isn’t that easy to find joy in, either.

The kind of experience people are looking for in Junior DBAs is also experience that’s far from your realm: backups, CHECKDB, that kind of thing.

I recommend people starting as DBAs from scratch to start with a foundation of backups and build upward.

I even have a free training plan for Junior DBAs that can help you get those very basics. Those things are extremely valuable for you to know.

But I don’t think you should “sell yourself” as a Junior DBA.

The biggest question here is what type of DBA work you want to do. Do you want to be a DBA developer, or a pure DBA?

There’s a lot of options here because of the increasing popularity of DevOps, which emphasizes breadth of skills and excellence in multiple areas.

Think about how your dream DBA job might still involve working with code. What’s the map look like between where you are and those skills?

Write a resume just for your target job

One thing that jumped out at me is that you said, “my resume is strongly inclined to show my C#”.

You need more than one resume. It’s fine to have one that’s inclined to show your C#, but you need another “base” resume highlighting everything you’ve done that makes you a candidate for that target job.

Your resume is just as much about where you want to go as what you’ve done.

I’m not saying to lie on your resume. NOT AT ALL. That’s a huge no-no. You also don’t want to make your resume long. 2 pages is “long” for a technical resume these days.

Writing a resume is the same thing as telling a short story about your life. Focus your short story on the things you’ve done with SQL Server.

You mention that you do have some chances to solve problems with SQL. That’s awesome! There needs to be a version of your resume that highlights those problems you’ve solved.

You also want to think about the skills needed for your target job, and highlight the skills you have which lead toward that job.

At your career stage, this usually means leaving off other skills you have, which just aren’t relevant for that dream job. That’s normal. It’s also normal at your career stage to tweak and edit your resume for each job you apply to.

Adjust your networking strategy to your target job

I know, I know, some of them are slimy. But there are some good ones out there, so it’s worth working through them.

Tell the recruiters about your target job. Ask them how they think you can get there.

When you do land an interview, try to get the email addresses for the folks who interview you. Send a thank you letter. If the job doesn’t work out, try sending an email asking for advice on how to improve.

Tone matters a lot in this email. This isn’t about getting that job, it’s gone, and  you don’t want to sound bitter- you want to use language about helping yourself improve for the future.

You won’t always get feedback, and that’s totally fine! But just the act of asking for it in a friendly, positive way may end up getting you referred for another job later on. It’s worth doing.

Consider finding code camps and hackathons. Be “the database person”. Work your way into projects and meet people.

When you meet people who work in the types of groups you want to join, ask them about how their group works. Ask what experience people needed to join. If you have a rapport going, ask them if they’d be willing to do you a favor and review your resume afterward and give you feedback on where you might be able to improve, with the goal of joining a similar team.

Pulling this off leads you to a ‘unicorn’ track

It’s natural that this has been tough for you, because it really is a hard transition.

But although it’s tough, once you are able to make the transition, having skills as both a developer and developing database expertise can be a killer combination. If you get a job where you can keep working both sides of those skills, this gives you a unique insight into problem solving and managing environments.

It can make you a unicorn. So while it’s tough, keep at it, and you’ll eventually find the right spot.