I’ve been working on some demo code for table partitioning. I have a table partitioned by a column named FakeBirthDateStamp, which is a DATETIME2(0) column. The table is a partitioned heap. At this point in the demo, I hadn’t built any indexes. I wanted to show that partition elimination could occur on a partitioned table, even without a clustered index.

So I ran this simple COUNT() query:

It took much longer than I expected, and did 367K logical reads.

Here’s what the actual execution plan looks like. I can see that a nonclustered index would be a smaller thing to scan to do a count, but we can’t tell by this view if it was able to get partition elimination or not. I’m suspicious that it didn’t because of that high logical read count.

Right clicking the table scan operator and looking at the properties, I can confirm that it accessed all 43 partitions– not just the partition for 1989. 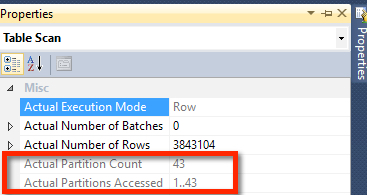 That isn’t what I meant to demo.

I found the answer when I hovered over the tooltip for the table scan and looked more closely at the properties of my predicate. 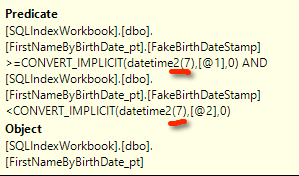 SQL Server is implicitly converting my date value to DATETIME2(7). That is a larger, more precise value than the data type I have in the table–FakeBirthDateStamp is DATETIME2(0).

I’ve told SQL Server to use a smaller data type for these dates which matches the column data type. SQL Server doesn’t have to do an implicit conversion anymore, and can eliminate partitions.

My performance immediately improves. I’m down to 52K logical reads (from 367K), and my CPU time and duration are waaaay better.

My execution plan no longer asks for an index, and digging into the properties I can confirm that partition elimination occurred.

Paul White wrote a great post that digs even deeper into type conversion and partition elimination. Read it here.