Update: even better news… courses are now open and free for all 😄 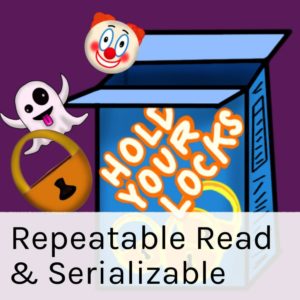 Here’s the scoop on what the course covers…

This course includes 47 minutes of videos, plus a quiz:

Note sure if this course is for you? Watch the first lesson right now, below – it’s 10 minutes long, and it covers important problems that you need to know about the default read committed isolation level in SQL Server.

Why do we have repeatable read and serializable? (10 minutes)

Today, we will be answering five questions:

First up: why do we need repeatable read and serializable?

In fact there can be clowns and ghosts – or phantoms– that are sneaking into your data!

When we read, say from an index in read committed, we run through that index getting locks as we go and releasing them right away. That also sounds good, but when you look into the details, what this means is: since we let go of the locks as soon as we read them, and our query may still be running, data can move around on us.

We may read some rows twice: if we read it and passed it and then it jumped ahead, we may see it again.

We may miss a row entirely: if I’m running through the data and a row is updated and moves behind me, I may never see it as I traverse that index.

And, we even can return combinations of data that never existed. Just plain part “before data”, part “after data.” And we’ll dig into this last one. It’s the weirdest one, we will dig into a demo in detail and see how that can happen in read committed.

Isolation levels are defined by “phenomena”

Under the default isolation level of read committed, the phenomena of dirty reads… Represented here by the poop emoji… that is not possible. So read committed at least has the virtue of not allowing the dirty reads phenomenon.

But there are other phenomena that can happen in read committed: we can have non repeatable reads, which we will see as a clown. And we can have phantom reads.

The name, at first didn’t make any sense to me. But it really means what it says.

It means: I read this data and if in my transaction I were to read it again, I would not get the same value. This can be a huge problem, and the data will just look wront to users.

Phantom reads are a little different

This is not that hard to imagine.

For a non-repeatable read, imagine that I’m running a report

I’m running this in read committed, and I do begin tran. My first SQL statement selects the SUM of my revenue from the table. I’ve summed up my revenue. After that first statement completes, another transaction updates a row in that table, and it changes some of the data. My report it has the summary data at the top, and it has a detail section below it. So I then run a statement that’s getting all the detail data. In read committed we are going to get the updated information in that second query. So, when we selected the sum of revenuel we have a non repeatable read in there. We read some data that changed after that. We read it again and it was different.

Now, when we run the detail data, now we’ve got an extra row in there that isn’t accounted for in our sum.

So, we either look like a clown, or we’re seeing a ghost in our records, neither of which are good.

Higher isolation can protect you from clowns and ghosts

The difference is, now that I’m in repeatable read, I am, after I select this data, I going to hold on to some locks on that data that protects it and says if anyone comes in and they try to update a row, I have a transaction that is – if I read this data again, it needs to be the same. I need to protect it. So while my transaction is ongoing, somebody else comes in and tries update that row. They are going to be blocked, and they can’t read until I’m done, until I commit my transaction or roll it back.

So now, when I select my detail data, my read are repeatable, they are all the same.

My CEO sees data that matches. I do not look like a clown.

This is good, right?

But there was an impact. There was a tradeoff.

That transaction that came in to update a row, it was blocked, and it had to wait.

What happens if in the rest of this transaction I’m doing stuff that takes a whole lot of time? And, what if the update is really important and there’s an executive from one of my clients waiting for that update to complete on a screen?

So, there are tradeoffs here, if we’re using this method to make sure our data is correct.

Because if we are using a disk-based table, repeatable read is going to protect this with locks. And with locks can come blocking.

Serializable says: you won’t have any non-repeatable reads, and you won’t have any phantoms. So it includes the protections of repeatable read, and then adds additional protections. In this case, I run my first query and I acquire key range locks that are held to the end of my transaction. I’m not just protecting exactly what I’ve read, but I’m protecting a range that says– new stuff cannot be inserted into this range. If an insert happens, the insert will be blocked. Same thing for an update, if an update happens it will be blocked. So when I run my last statement, I can get data consistent with the first statement.

But again, this is a pessimistic– what we’re talking about with repeatable read and serializable are pessimistic isolation levels. We’re collecting key range locks, and, our tradeoff is blocking.

But we get correct data!

And that is a good thing!