Whee! It’s the first day of the main SQL PASS Summit conference and I made it to the keynote early for the first time ever. The hype says we’re going to see some great presenters this morning.

Memories: my first Summit, that time I was too shy to say “Hi” to Mr. Denny

The very first time I attended this conference, I was so excited to attend sessions and learn. I was also excited to connect with others, but I just wasn’t sure how.

I clearly remember seeing Denny Cherry in a session – he was also attending. I recognized his fantastic hair and big smile from the photo he had at the top of his blog posts. I’d found his blog several times when tracking down a solution to a problem. I wanted to introduce myself, but I was just too shy.

And I didn’t say hi.

Years later, I have gotten better at simply saying, “Hello! I read your blog, and I want to say thanks for writing.”

Denny isn’t here at the blogger table this morning, and he’s really missed this year. If he’s helped you out too, please send him some love and let him know you’re thinking about him.

The Summit is old enough to vote

Kicking off the keynote, Adam Jorgensen mentions that this is the 18th SQL PASS Summit. Whoa, I hadn’t realized this. I’ve seen the PASS Summit change a lot over the last five years, and this is just a fraction of the lifespan of the conference. 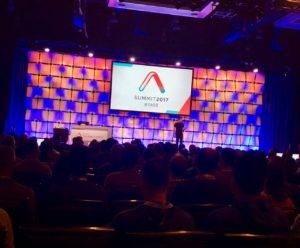 General Manager of DB systems engineering Rohan Kumar is leading off the technical portion of the keynote. Rohan is a great speaker, and he starts us off talking about the challenges of leveraging data, cloud, and AI well.

Note: Our conversation is no longer just about SQL Server databases anymore at this conference. This has been changing over the last few years, and it finally feels really comfortable here– it’s no longer forced at all to talk about cloud, and to not be stuck in the concept of a single SQL Server instance.

In his talk, Rohan emphasizes community feedback, and valuing how that shapes the product.

I do believe this is sincere, and it’s real. Microsoft has changed a lot as well over the last few years, opening up to new options. Customers can now run SQL Server on Linux. Managed PostGres exists in the cloud. They are listening, and are changing.

I don’t know why, but I get a real kick out of changing terminology. This morning we’re talking about the data estate: “hybrid” technology. This is an acknowledgement that it’s not on-premises data OR public cloud data. Instead, there’s an “and” between those two worlds.

We’ll be hearing a lot about 2017 features, but Rohan acknowledges that with Microsoft’s cloud-first release cadence, a lot of these features and innovations have been released before the “boxed” product release. To most of us in the room, we’re still in parts of that Data Estate where “boxed product” releases are a big deal, and we’re even still a few years behind.

But I do think that the timing of the conference this year, right after a big release, means we won’t be hearing too much about huge new features this week. Instead, I think we’ll get highlights of what’s already shipped, a few new things, and some indications of areas that will continue to see investment.

And with that, Rohan brings out two Microsoft rockstars, Bob Ward and Conor Cunningham, to show us some magic.

Bob Ward and Conor Cunningham show us some magic

Ooo, this is interesting. Remember RamDisk? Well, we’re seeing a demo of “Scalable Persistent Memory”, a technology from HP, and comparing performance to SSDs.

It does turn out that reading from memory is way faster than reading from storage, and the idea that this will be supported from Microsoft is exciting. Traditionally memory mapped as storage has been officially supported for tempdb, and there’s been lots of notes and warnings about using it anywhere else with SQL Server.

It’ll be interesting to see if these are also supported with Availability Groups and other features.

We get a demo view now of how Query Store and 2017 features can automatically fix plan regression.

This is an interesting feature. But we do see that there is still a “blip in the matrix”, there’s a time period when performance takes a dive, and then is automatically fixed.

For companies that don’t have strict performance requirements, this may be enough. But there’s still going to be many companies where the unexplained dip in performance is extremely frustrating. Some folks worry that the job of the DBA or developer is going away, but what I see is that a skilled person who can dig into Query Store and make sure that this performance problem doesn’t come back again after the next reboot, or the next change to the code – that person is still going to be really needed.

Rohan is back: Talking new features

I like what I’m hearing: Rohan says that what we are seeing in 2017 with changes and growth in the query processor is a first step. That we will be seeing more of this, and that this will be changing.

I’m truly excited about this and can’t wait to see how this feature evolves, and how optimization in SQL Server evolves.

In fact, one of the things I was really hoping to hear in this keynote was signs that adaptive query processing remains important and will be getting more investment! So color me thrilled that it got some time and focus.

Bring on the engineers! Now up, we get a demo from Tobias Ternstrom and Mihaela Blendea about using automation and docker to quickly set up a development environment.

I’ve gotten the question from folks, “Why would I want to use SQL Server on Docker?” And my favorite personal use case is setting up a super quick test environment. But these two are doing it way better than I ever have.

WOOOO! For anyone who’s a little tired of SSMS, or who uses Linux or a Mac as their primary machine, there’s a new tool in town – and it doesn’t just run on Windows.

SQL Operations Studio is going public and I’m incredibly excited that this new tool is becoming available. I can’t wait to start using this tool and exploring what it can do.

Want help from Microsoft managing an instance in the cloud? Rohan talks about this recent project, and how Microsoft wants to continue to invest in this as a way to help people migrate to the cloud.

I think it’s also interesting to hear about this product. This has been released for a bit, and when I first heard about it, I honestly wondered how much Microsoft would like this “mixed” support model after they got into a bit. It seemed like it could go either way. But we did get some time on this with emphasis on it continuing and growing.

This is an acknowledgement that companies can’t all rewrite their existing applications. People still want their SQL Server agent and crazy linked servers.

And yes, another sign that DBA and developer jobs aren’t going away. The support job may be shared with Microsoft in this product, but someone on the client side still needs to be able to figure out why the heck the code needs to do what it’s doing.

Coolness continues onstage, but I gotta wrap this up, fix my links in this post, and get myself collected and prepped for my upcoming session this morning (WHOOOO!)

Was this a great keynote? No huge announcements. I’m excited that Project Carbon is going public (seriously!), and I love the emphasis on community and the indications that Adaptive Query Processing will get lots more love. My life didn’t change, but I like the look of the road ahead, and I am nicely warmed up to dive into the conference. I’m a happy camper.

Even if you aren’t at the PASS Summit this week, there’s more goodness coming, and you can watch it live on the internet, too! So join us, whether virtually or in Seattle.