You can’t put a computed column in a columnstore index

If you try to create a nonclustered columnstore index on a computed column, you’ll get error message 35307:

But SQL Server may still decide to use a Columnstore index for a query specifying a computed column!

I went ahead and created a nonclustered columnstore index on the other columns in my table, like this:

Then I ran this query against the table, which groups rows by the computed column, BirthYear:

The columnstore index isn’t the best choice for this query:

Where’s BirthYear? Let’s look at the Compute Scalar farthest to the right

Clicking on that compute scalar operator and looking at the properties window, we can see that SQL Server looked up the definition for the computed column, and figured out that the computation is based on columns in our nonclustered index– so it could scan that index, then run the computation for each row. 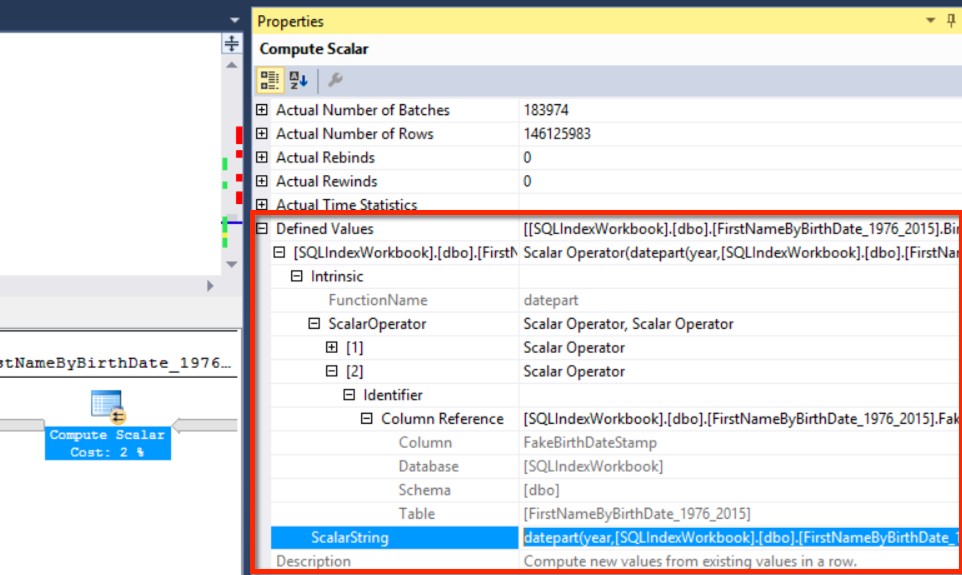 SQL Server is waiting until the third operator, a filter, to filter out the rows for BirthYear between 2001 and 2015:

The cost estimate on that Compute Scalar is waaaayyy low…

This is an actual execution plan, so I have Actual Time Statistics, and I can see exactly how much CPU was burned to compute BirthYear for every row. Scrolling up in the properties window, I find that this took almost five seconds for each thread that worked on the compute scalar. That’s more than 80% of the query’s duration just to figure out BirthYear.

My original query has the predicate, “BirthYear BETWEEN 2001 and 2015”. Let’s change that predicate to a non-computed column:

I’m still using the computed column BirthYear in my SELECT and GROUP BY. 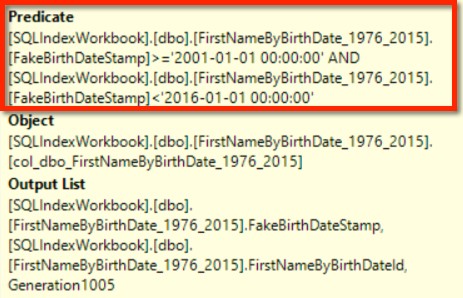 This means far fewer rows are flowing into the compute scalar operator – we don’t have to calculate BirthYear for any of the rows from 1976 through the end of 2000.

If we couldn’t re-write the predicate easily for whatever reason, we might choose to keep the non-clustered rowstore index on BirthYear around and use OPTION (IGNORE_NONCLUSTERED_COLUMNSTORE_INDEX) in our query. 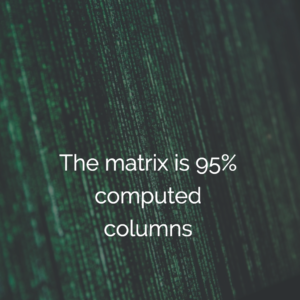 Be careful with computed columns and columnstore

I had assumed the optimizer would be reluctant to create a plan for a computed column, since that column can’t be in the columnstore index. But it turned out to be pretty eager to do it.

If you’ve got computed columns and are testing out columnstore, look carefully at your queries and check to make sure you don’t have any super-expensive compute scalar operators showing up in your plans where you might not want them.

Wouldn’t this all be easier if you could just put the computed column in the columnstore, anyway? Vote up this Connect item.