Holy mackerel, it is!

I tend to think of development environments as SQL Servers where customers are surely never allowed to enter, for fear that the licensing dollars will pile up like banks of snow around the gates to the instance.

But there’s an exception. Check out this screenshot from Microsoft’s SQL Server 2016 Licensing Datasheet: 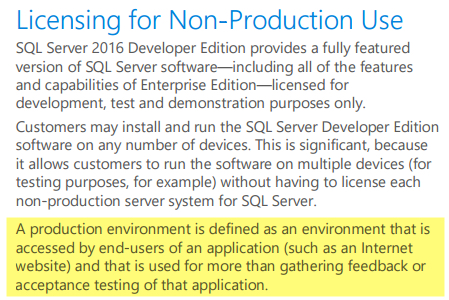 Developer Edition allows for users of an application to do acceptance testing– I’m not a licensing salesperson, a Microsoft employee, a lawyer, or Doctor House, but this wording is pretty clear on the subject to me.

And Developer Edition is now free for SQL Server 2016 and 2014 via membership in the Visual Studio Dev Essentials program.

Not only is that awesome, it’s even more awesome than I thought it was.

Update: the SQL Server 2014 licensing guide is a bit longer, and notes that there’s a limitation:

Customers cannot use the software in a production environment, and any test data that was used for design, development or test purposes must be removed prior to deploying the software for production use.

So be very careful if your User Acceptance Testing environment is used to “stage” data that is later restored to production. Per the 2014 rules, that is a production system.