But does it catch “bad” parameter sniffing? 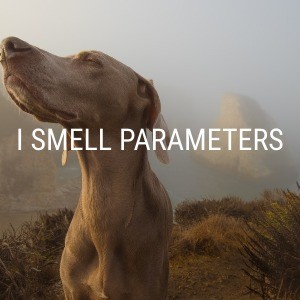 Plan choice regression is explained in Books Online this way:

During the regular query execution Query Optimizer may decide to take a different plan because important inputs became different: data cardinality has changed, indexes have been created, altered or dropped, statistics have been updated, etc. For the most part new plan it picks is better or about the same than one was used previously. However, there are cases when new plan is significantly worse - we refer to that situation as plan choice change regression.

Simply put, we’re looking for queries that have gotten slower.

Of course I started wondering exactly which scenarios might still be hard to identify with the new feature. And I wondered– does it have to be two different query execution plans? Or could it find same plan which is sometimes fast and sometimes slow? In this post I’ll show:

When you reuse parameterized code in SQL Server, the optimizer “sniffs” the parameters you compile the query with on the first run, then re-uses that plan on subsequent executions. Sometimes you get a case where that first run is fast, but later runs are slow because the execution plan really isn’t great for every set of input values.

Here’s an example of some code that’s particularly troublesome. This uses the free SQLIndexWorkbook database– later renamed to BabbyNames:

I’ve enabled QueryStore on the SQLIndexWorkbook database. I clear out any old history to make it easy to see what’s going on with my examples with this code:

I first run the stored procedure 100 times for males named Sue. This gets a plan into cache that is under 100 milliseconds when run for specific names, but takes more than a second if the @firstnameid parameter is passed in as NULL.

After running the “fast query” 100 times, I open QueryStore’s “Top Resource Consuming Queries” report and can see it right away. The average duration of the query was 73.5 milliseconds: 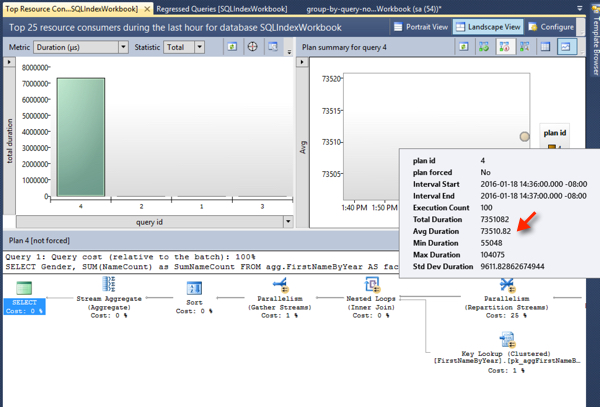 Let’s re-run the stored procedure with different values – the slow ones, that looks at the values for all men. This will reuse the exact same plan, but it will perform much more slowly. We only run it twice:

I happened to run the query in a new “interval” or time period. This means the slow plan now shows up right away in the top resource consumers to the right of the old plan. Hovering over the circle for the plan, it saw both runs and saw an average duration of 1.2 seconds.

But then, the procedure is run 100 more times for a specific first name, the fast version:

The Query Store report is showing us the bubbles based on the average duration. This makes the bubble move downward in the graph after those executions:

It’s possible to see that there was a slow run by changing the graph to show the “max duration”, but you have to know to do that.

This Doesn’t Show as a Regressed Query 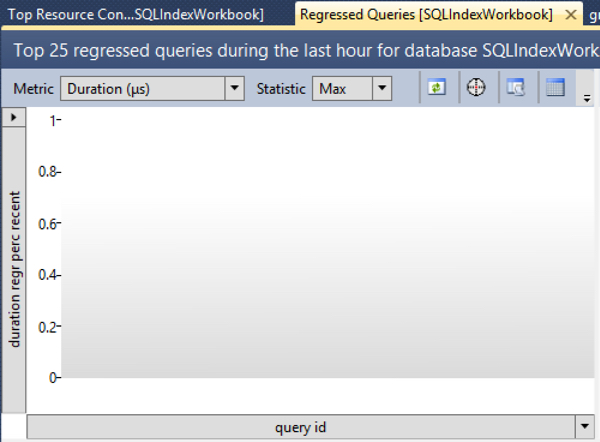 Even looking at the “Max” statistic, this query doesn’t show up.

What Qualifies as a Regressed Query in Query Store?

First up, I don’t see anything in that TSQL that insists that a “regressed” query must have different execution plans at different sample times. That’s good! (The Books Online text raised this as a question for me.)

Our query isn’t showing up in the results because of the “WHERE duration_regr_perc_recent > 0” predicate. I dug into the data, and our query (query_id=4), has max_duration_recent = 1231557 and max_duration_hist = 1231557.  My ‘recent’ period was defined as the latest hour. Based on the pattern sampled, it sees the regression as zero.

In other words, our query was sometimes fast and sometimes slow in the last hour. It hadn’t run before that, so it wasn’t slower than it had been historically.

If a frequently executed query is usually fast but occasionally slow, and that pattern happens frequently across sample times, that query may not always show up in the regressed queries pane.

But if it’s one of the most frequent queries on your system, it will still show up in Query Store’s “Top Resource Consumers” report, regardless. We had no problem at all seeing it there.

Takeaway: When Looking at Top Resource Consumers, Look at Max (Not Just Averages)

The Query Store reports have lots of great options. Averages are interesting, but switching to view the max can help identify when you’ve got something causing a high skew in query execution time. I also prefer looking at CPU time (how much time did you spend working) rather than duration, because duration can be extended by things like blocking.

Here’s what the chart in the “Top 25 Resource Consumers” report looks like for Max CPU time for our query for that time period:

That jumps out a little more as having an anomalous long run!